Slovenia is a small country of just 2 million people. It borders Croatia to the south, Hungary to the east, Austria to the north and Italy to the west. Despite being small, the country has everything from beaches to mountains and a range of regional climates and cuisines. The capital is Ljubljana, which is very diverse and environmentally conscious, with restricted car use in the centre and plenty of cycle lanes.

A brief history of Slovenia

Present-day Slovenia has been inhabited since prehistoric times and there is evidence of human activity from around 250,000 years ago! The Romans also ruled Slovenia and had a post in Ljubljana, which at the time was called Emona. In the 5th and 6th centuries, the area was subject to invasions from the Huns and some Germanic tribes on their way into Italy. The remaining Slavic tribes migrated to the Alpine area after the departure of the Lombards, the last Germanic tribe who headed west.

In the Middle Ages, The Carantanians, one of the ancestral groups of modern Slovenes, were the first Slavic people to accept Christianity, which was mainly brought to Slovenia by Irish missionaries. In the 14th century, most of the present-day territory was taken over by the Habsburgs, who were subsequently attacked by the Ottoman Empire. In 1797, France dissolved the Republic of Venice and Venetian Slovenia was passed to the Austrian Empire. The 19th century saw a revival of culture and the Slovene language; there was also a Romantic nationalist quest for cultural and political autonomy.

After the Slovenians suffered heavy losses in the First World War, The Slovene People's Party launched a movement and demanded the creation of a semi-independent South Slavic state, under Habsburg rule. Eventually, the Kingdom of Serbs, Croats, and Slovenes was set up, which was what later became the Kingdom of Yugoslavia.

During the World War, Slovenia was the only present-day European nation that was trisected and annexed into both Nazi Germany and Fascist Italy. During World War II, Slovenia became part of Federal Yugoslavia. Then a socialist state was established but because of the Tito–Stalin split in 1948, economic and personal freedoms were broader in Slovenia than in the other Eastern Bloc countries. Following uprisings in the late 1980s, the country began its quest for independence and 88% of the electorate voted for a sovereign and independent Slovenia and by 1992, Slovenia was recognized by the world as an independent state.  In 2004 Slovenia joined the European Union.

What to visit in Slovenia

There is so much to see in Slovenia, both in terms of nature and architecture. We begin in the capital, at the 16th century Ljubljana Castle. You can take the Funicular Railway up to the castle and walk around the grounds for around 10 Euros. In terms of architecture, one of the most impressive buildings in the capital is the national and University Library, it was designed in 1941 by Jože Plečnik.

Bled is another nice city to visit, located to the north-west of the capital, it is situated around a very beautiful emerald green lake. If you prefer to be by the water, then why not visit the seaside town of Piran which is characterized by a maze of winding alleyways from the Venetian period.

If you go inland to the east from Piran, you will reach the Škocjan Caves, which are an incredible cave system that is included on UNESCO’s list of natural and cultural world heritage sites. It is considered one of the most important cave systems in the world and is a must see! For a very reasonable price, you can also have guided tour. For nature lovers, one of the best things to do in Slovenia is to hike to the top of Mount Triglav, the nation's tallest mountain which stands at 2,863.65 meters and is situated in the Julian Alps. At the top of the mountain, there is a small metal structure, the Aljaž Tower, which acts as a storm shelter and a triangulation point.

Slovenian cuisine is as varied as the landscapes in this country; and has centuries of history, the first Slovene-language cookbook was published in 1798. Soups are a common staple and very popular in Slovenia, they come in all varieties from vegetable ones, such as creamy mushroom, to the beef and noodle soup that often accompanies a Sunday lunch. In 2015, twenty-two Slovenian foods and products were protected at the European level.

Slovenia produces very good olive oil, which generally has a slightly more spicy, bitter, and fruity taste than its southern Mediterranean counterpart. Nanosa is a hard, cow’s milk cheese; it contains small holes about the size of peas. Idrija žlikrofi are small boiled dumplings filled with potatoes, onions, and lards, they can be served with a variety of sauces or gravies, including goulash. Karst prosciutto is cured meat, produced in the traditional way on the Karst Plateau in southwestern Slovenia. A traditional winter dish is Jota, which developed from the lack of variety in the winter, so people had to be quite clever with their use of the ingredients, this dish combines turnip, cabbage, potatoes and beans for a healthy side dish. Štefani pečenka is meatloaf with a hard-boiled egg inside; it is often eaten during the holidays. Delicious Kočevje forest honey is produced in the Kočevje area. For dessert, Prekmurska gibanica is a popular pastry that originates from Prekmurje and is composed of eight layers, which contain poppy seeds, walnuts, apples, raisins, and ricotta.

Pale lagers are the most popular type of beer in Slovenia. The most popular brands in Slovenia are Laško and Union, although a number of smaller breweries also exist. Winemaking has existed in Slovenia since the time of the Celts and Illyrian tribes, long before the Romans introduced winemaking to France, Spain and Germany. For this reason, there is some really good wine using Chardonnay, Riesling, Sauvignon, and native Zelen grapes. 75% of the production is white wine, and one of the most special wines is the Jazbec Sparkling Teran.

Discover how to reach and what to do in Slovenia: tips, events, local festivals, culture, food and all the other details to explore Slovenia can be found on our blog! 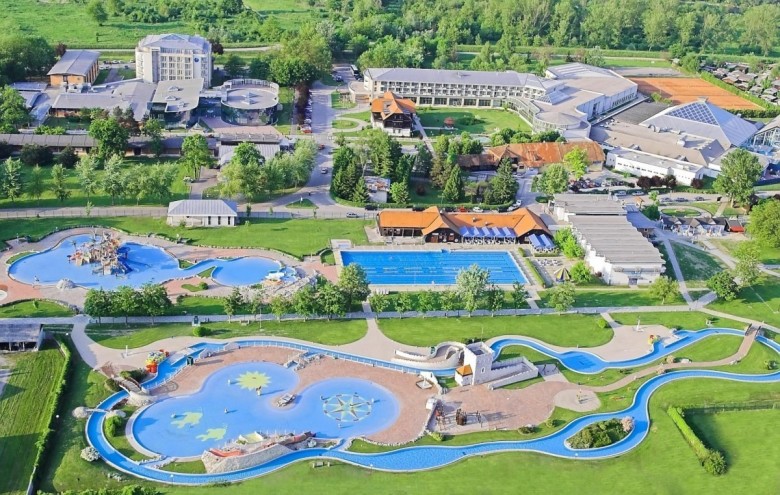 NetFerry recommends a family trip to the thermal baths in Slovenia
Take a trip to Slovenia, the green heart of Europe; it will amaze you with its varied landscape and natural beauty, it is an excellent place for the whole family. There are plen...
30 December 2019