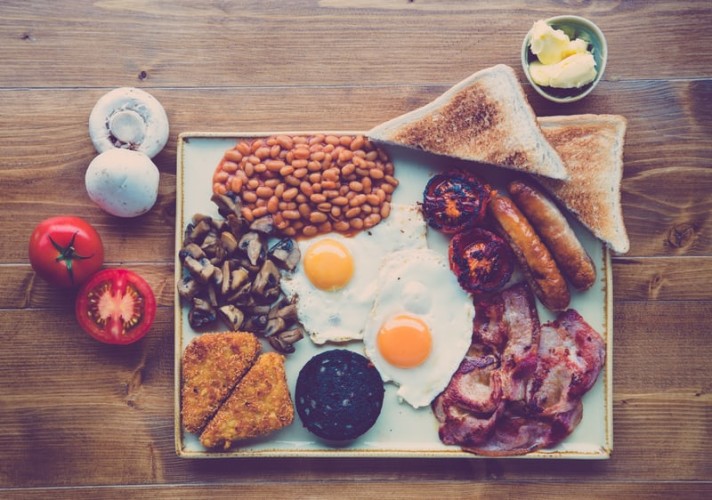 Okay, we have to admit it, English food doesn't have the best reputation among gastronomers. But there are some well-loved foodie favourites from the UK which we want to explore today. English food has been through a lot; from wartime rationing to the invention of the freezer and multiculturalism; each historical epoch has made its mark on the cuisine. If you visit the UK today in search of something good to eat, then you'll find extremely varied gastronomy, offering high-quality cuisine from all over the world in large cities like London, Edinburgh and Manchester. There has also been a resurgence of traditional British dishes in gastropubs as people began to modernise some classics using local and artisan products. Finally, if you are looking for the pinnacle of fine dining, then look no further than the capital. There are 67 Michelin star restaurants in London, ranging from one-star restaurants to two and three-star restaurants!

We will start with breakfast and the classic Full English which, as we know, involves bacon, sausages, eggs, tomatoes, beans and toast. In Scotland, don't forget the black pudding, the added extra. This breakfast is not for the faint-hearted and can be found in a range of establishments; from your local 'greasy spoon cafe' on the side of the road, to pubs and 5-star hotels. The quality of the ingredients can range from frozen, to top quality, free-range local produce. So choose your fry-up according to your taste and budget. And if an entire plate of fried meat and eggs sounds too much for in the morning then opt for a 'bacon butty' or bowl of porridge oats, two other breakfast classics.

Next, let's go for Sunday lunch and the magnificently humble roast dinner. It is traditionally eaten with the whole family as the main meal on a Sunday lunchtime or late afternoon. The meal consists of vegetables and roasted meat. The meats can be either beef, chicken, pork or lamb. Then the accompanying vegetables must include the obligors roast potato, which is simply a potato roasted in the oven with the fat from the meat. Then you have your vegetables, which generally include boiled carrots, cabbage and broccoli, green beans. Then you have the gravy; this is the gratifying sauce that is drizzled onto the dish before serving and made from the meat juices and vegetable water. If you are eating roast beef, you'll typically also get a Yorkshire pudding; which is a round, savoury baked pudding made from a batter, consisting of eggs, flour, and milk or water. Then we have the sauces if you are eating roast chicken; its bread sauce, lamb; mint sauce and roast beef; horseradish.

For dinner on a Friday night, nothing is better than going for a curry! Firstly you'll head to the pub for a few pints with friends after you are all sufficiently jolly, head to the local curry house - most UK towns, cities and even villages have one. A spicy curry is the best way to soak up the alcohol and crown off an evening with friends. Curry is a big part of the food culture in the UK thanks to the migration from South Asia from the 1950s onwards. Indian, Pakistani and Bangladeshi immigrants have shaped the British culinary landscape by introducing people to their delicious cuisine. This culture has continued, and now some British curry houses have existed in the same families for generations and become legendary local eateries. The word curry is a generic term for an aromatic sauce that can be both spicy or creamy and can contain either meat or vegetables. Curries come in many varieties; from mild and creamy ones, such as Korma to the Balti, Madras and spiciest being the Phall or Vindaloo. However, the most popular curry is Chicken tikka masala, which is the British national dish, not only because it is the most popular, but because it is a perfect illustration of the way Britain incorporates and adapts external influences.

If this lot doesn't fill you up then, as far as snacks or street food go, the best option is to go something encased in pastry, or something fried. The obvious classic has to be the fish and chips. To find the best, head for the coast, where the fish will be fresh, and you can eat while strolling along the promenade of a seaside town. It doesn't get more British than that! But one last thing to try if you're on the move is a Cornish Pasty; a snack, or entire lunch, depending on how hungry you are. Pasties have their origins in south-west Britain; they are a round piece of shortcrust pastry filled with either meat and or vegetables, folded over and baked in the oven. The traditional filling contains beef with carrots, potatoes and onions, but there are other delicious varieties containing cheddar and onion and even curry! You can find this great snack in many bakeries and train stations all over the UK, but strictly speaking, the authentic Crominsh pasty must come from Cornwall.

There is a range of ferries to and from the UK on the Netferry website. Check out the timetables, prices and onboard accommodation options for boats to destinations including Dover, Portsmouth, Plymouth and Harwich. The Netferry website allows you to book your ferry ticket in just a few clicks; it is fast and straightforward to use.